fraction no.4 / small but big 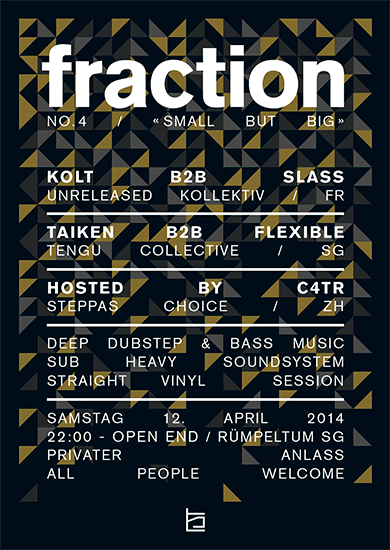 fraction
no.4 / small but big

Founded in early 2007, the aim of the Unreleased Kollektiv is to be a platform that gives new opportunities towards different styles of electronic music. As the fountain of Marcel Duchamp and his art’s theory does, these pieces of sound are dropped here not because they are actually an artistic work by themselves, but they are only proposed to be recognized as being a work of art. At the end you are the one and the only one who can decide.

Releasing mixes, tracks and albums to feeds your soul, the kollektiv will explore the minimal music, as well as dubstep and any kind of decent bass music, but also on weirder stuff such as ambient and noise atmospheres. All of them are oriented towards new feelings with the help of any kind of sound. You’re welcome to spread the sounds you liked.

C4TR is mainly known as the man behind Steppas Choice. THE foundational Swiss radio show where everyone who claims himself a Swiss bass music defender must have played. Running for over 6 years, every Monday evening from 8 till 10pm, the show is not just a quality source for fresh and upcoming releases but also a platform to hear the local dubstep culture in full effect.

We are pleased to have Kolt and Slass, as well as C4TR over for a decent session of quality bass driven music. All three are steppers since day dot in Switzerland and contributed much energy in the genre we know today as dubstep. In other words these men are some of the few dubstep pioneers we have in our country.

Alongside Taiken and Flexible from the Tengu Collective and of course the sonic power of the Tengu Soundsystem we are sure to have a small but big party together!